I love meeting intellectual guys who work in the menswear industry. Take Kamau Hosten, for example. He's a soft spoken gentleman who has not only studied the finer points of menswear, but he dresses and acts the part like few I've met. Just by looking at him, you know he's a smart guy who's got his sh-t together. And that's not by accident.

Kamau is a Trinidad native who grey up in Florida. He was a journalist and reporter by trade, before making the leap to menswear. It wasn't until he picked up a part-time retail gig in Miami, and read several books on classic menswear, that he saw an opportunity to combine his talents and begin consulting for luxury brands on refining the copy and content on their websites. This lead him to his most recent post in the U.S. headquarters of Brioni as the Creative Services Manager (visual merchandising and marketing) for the U.S.

As you can imagine, when you're in charge of visual merchandising and marketing for one of menswear's most historical and luxurious tailoring brands, you have to look the part. Therefore, as he was making the shift from reporter to menswear branding expert, Kamau studied the game, gradually refined his taste, and put together a smart wardrobe of classic tailoring. The first lesson he learned was "less is more". Rather than accumulating more clothes and growing a larger wardrobe for his new fashion gig, he did just the opposite. He slowly cut out things that he didn't wear, or didn't represent him properly (Ed Hardy t-shirts were rampant in Miami at the time), and eventually settled on a handful of carefully curated pieces that would carry him through the next few years.

We caught up with Kamau at the Liberty Fairs show last week to give you a taste of his personal style and share the story about how he broke into the menswear business. 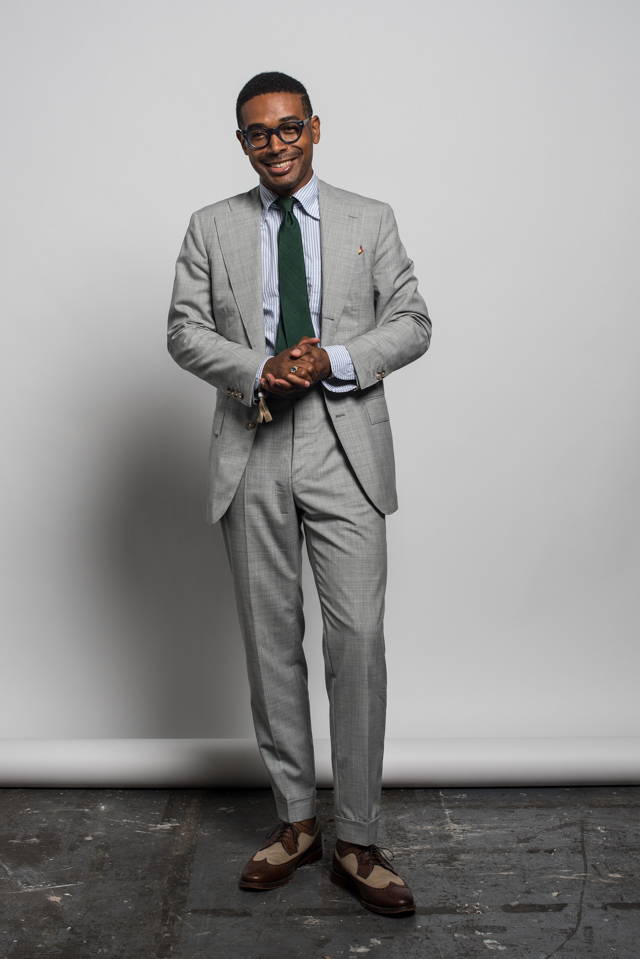 "My grandmother and mother both took great pride in not only how they dressed, but how they carried themselves. They both sewed their own clothes, too, so I always observed that. It's from those two women that I developed this deep appreciation of menswear. I'm told I was particular about my clothing even as a young boy; once chastising my godmother (in the harmless way a four year old chastises an adult) for throwing a new He-Man t-shirt casually on the ground.

My first foray into tailored clothing was a ventless, navy three button (NOT 3-roll-2), suit with triple pleated trousers, purchased at least one size too large from a slightly dishonest salesman. I paired this suit with an equally cringe-worthy pair of black, lug-soled square-toe loafers... At the time I thought I was the freshest dude around. I sort of devolved from there, taking a brief trip into the equally brief trend of retro jerseys and their requisite coordinating fitted caps of the early 2000s. A few years later, I had a brief flirtation with a garish, yellow Ed Hardy hat which I paired with Yellow Nike Dunks. From there, it was gradual climb to tailored clothing.

I started with what I could afford; predominantly mass market mall stores. From there, I poured over the works of Alan Flusser and Bruce Boyer, learning the basics of menswear, all the while wondering how the hell I was ever going to afford a bespoke suit on a journalist's salary. It's been a gradual climb from there; off the rack suits (which is still most of my closet) to some made to measure, shirts, ties and shoes of better construction and quality, and, most importantly paring down. I've gotten rid of a good amount of pieces that never saw the light of day, slowing whittling my closet down to well-made essentials that I enjoy." 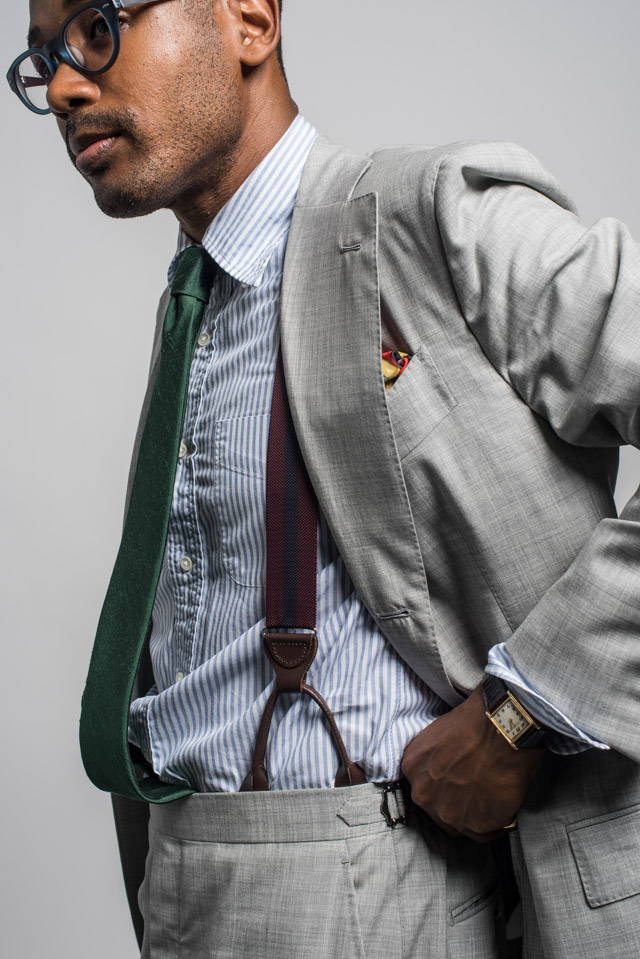 "My Patek Phillipe tank from the earl 1940s is one of my staples. I wear it daily. The size and shape are ideal and quietly elegant. Many watches of today are much too bulbous to fit decently beneath a shirt cuff; a sartorial miscue that's personally vexing." 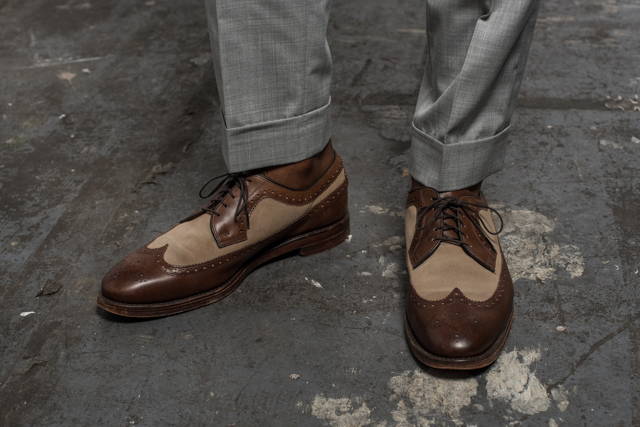 2. On Making a Statement 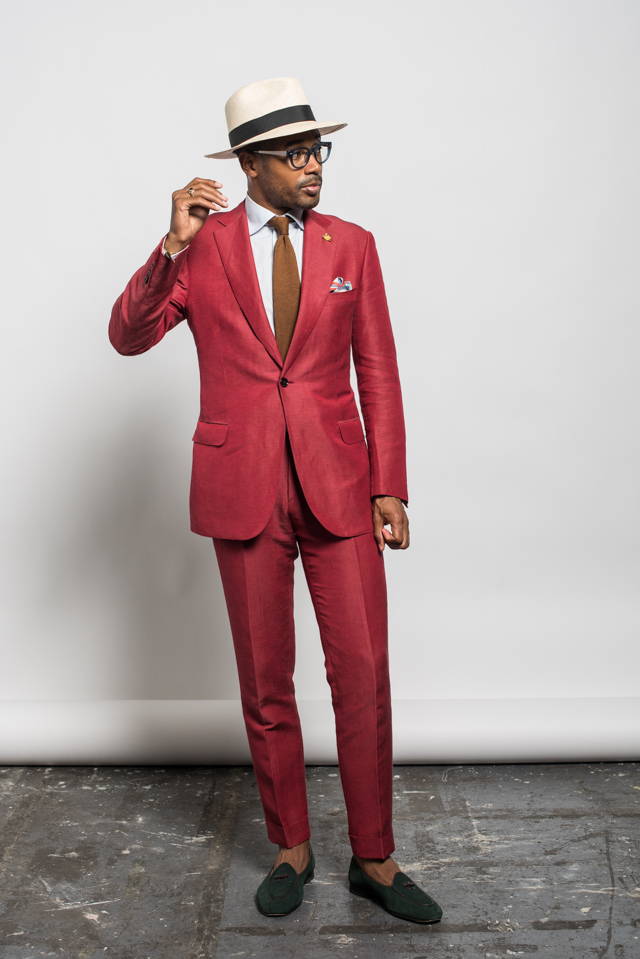 "In menswear, we tend to judge each other rather quickly. I think how I dress gives off an impression that I can articulate my opinions intelligently, and that I care deeply about the subject matter I'm writing about or the brand I'm representing. On a more general level, it connotes a certain attention to detail that others respect and appreciate. I don't think I'd have been taken as seriously in trousers pooling at the bottom and jackets sleeves hitting my knuckles.

The campari tomato suit gets a good amount of looks. I'm fair game for attention and ridicule for wearing something a bit out there from time to time. However, I didn't anticipate a guy on 120th and Frederick Douglas Blvd. belting Jidenna's "Classic Man"...especially considering he did the entire chorus."

For the record, you shouldn't be mean, even if you look this clean. 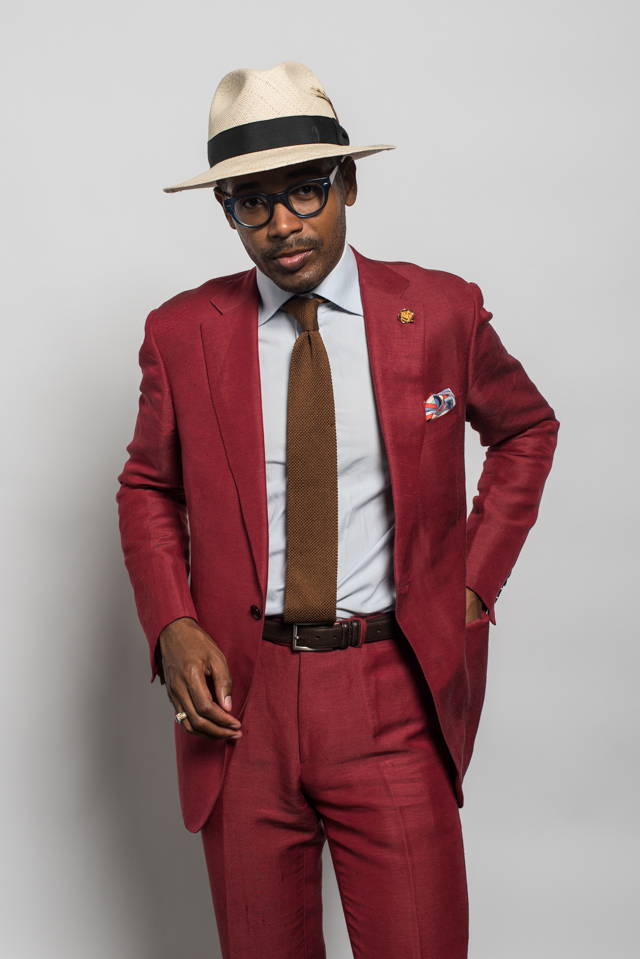 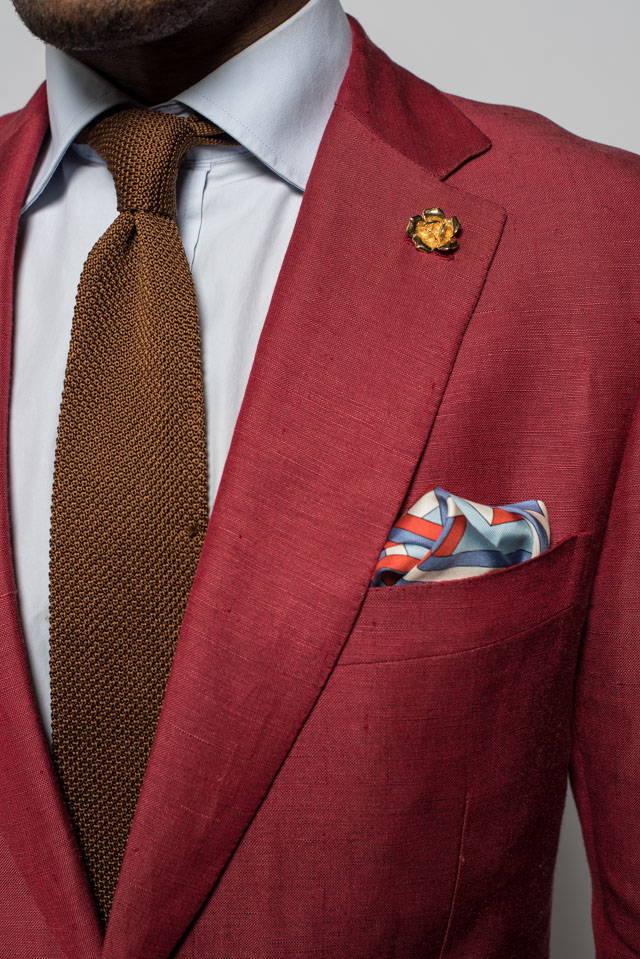 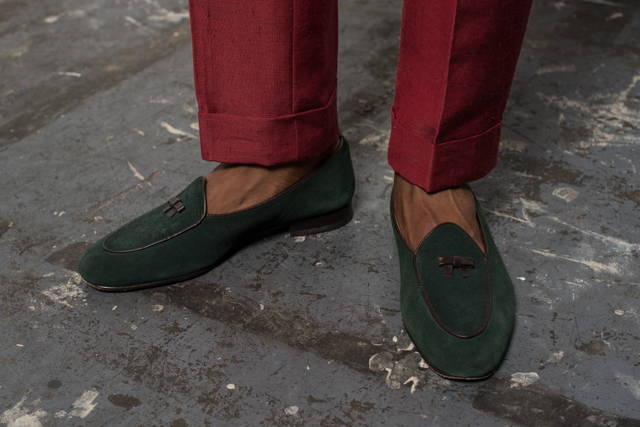 3. On Sense of Occasion 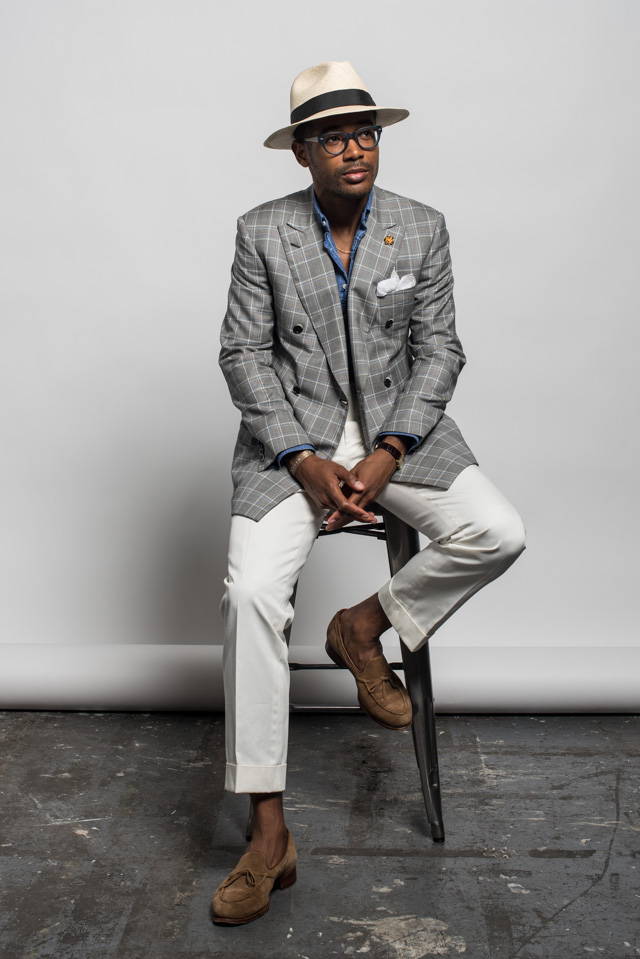 "I'm fond of tailored clothing over sportswear, preferring to air on the side of formality. I never want one piece I'm wearing to stand out from anything else, except when I get that FU urge (red suit from look 2, for example).

I've had the pleasure of meeting one my three style icons, Bruce Boyer (Dr. Andre Churchwell and Luciano Barbera are the others). The sage he is, left me with this: 'We seem to have lost our sense of occasion,' in regards to dressing. I find it crucial to regain that, to give a shit enough to look presentable. To have a sense of respect for the people and places we visit enough to step outside of our own comfort zones. There's a selflessness in that. 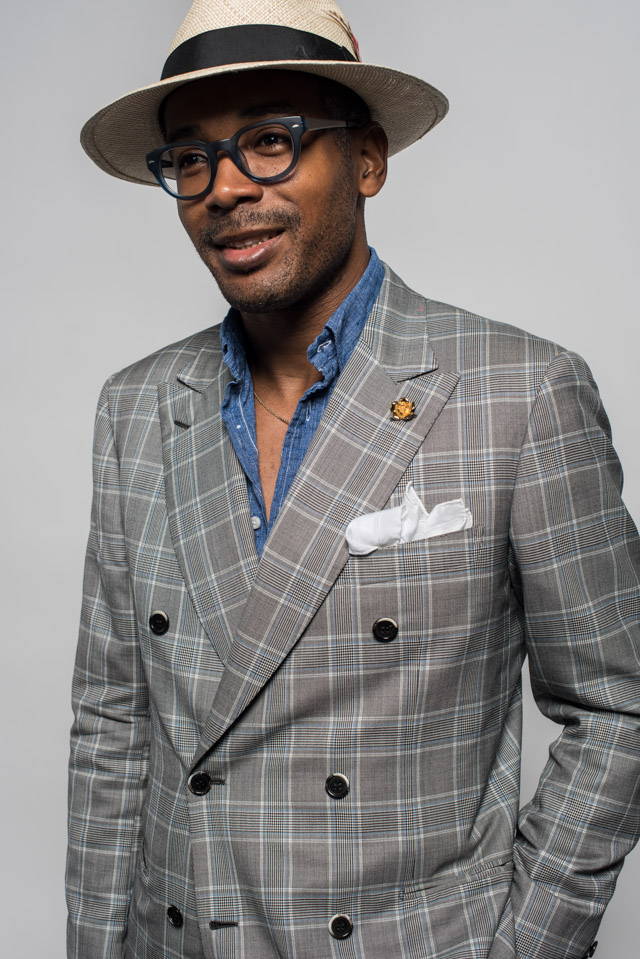 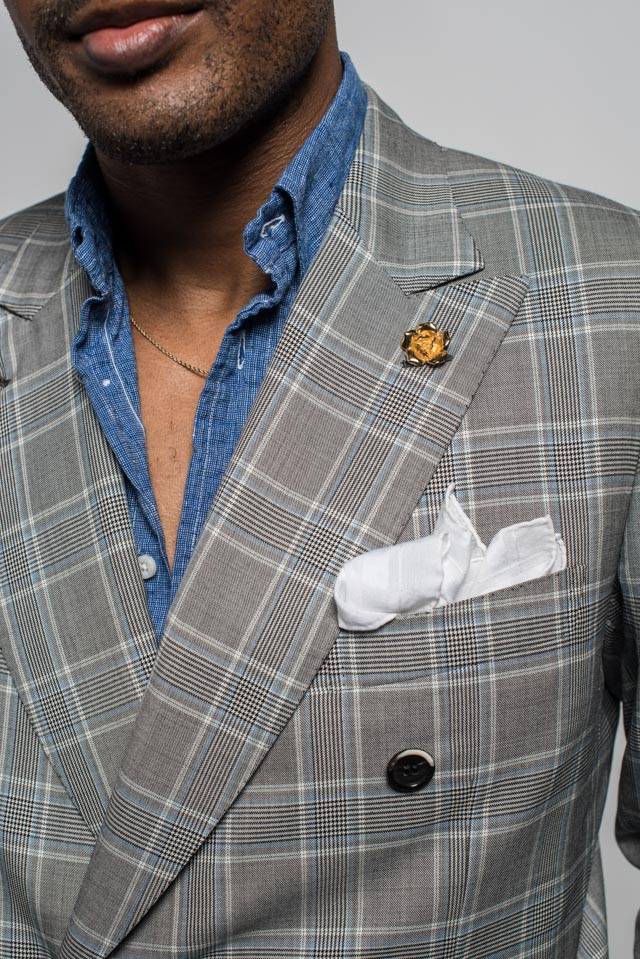 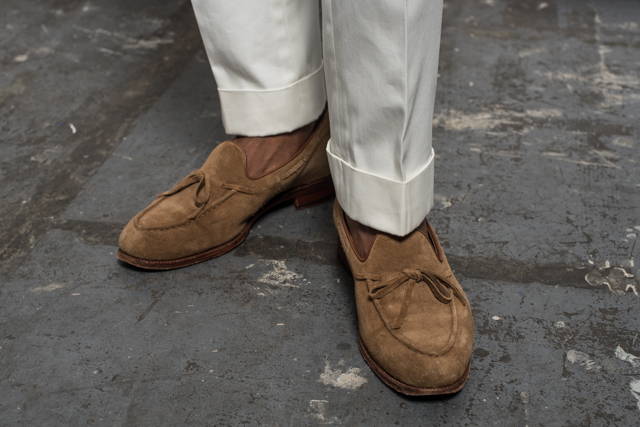