Hang around inside the small world of bespoke tailors and menswear connoisseurs long enough, and you start to see patterns. Literally and figuratively.

There are certain historical menswear garments that have infiltrated the "insider's club" of tailoring specialists. Today, for example, we take a close look at a fabric that is very popular among the league of extraordinary clothing connoisseurs; Solaro.

"While a lot of different fabrics are referred to as Solaro, only London cloth merchant Smith Woollens, now part of Harrisons, offers the real thing. It’s an olive colored wool cloth, which comes in a variety of weaves including herringbones and twill. Its defining feature is that it’s woven with red yarns on the underside, which show through the fabric to a greater or lesser extent depending on the lighting and the angle of the viewer.

The cloth is around 11oz in weight, which is mid-to-heavyweight by modern standards, even though Solaro was originally designed as summer suiting (to reflect-away the sun). The idea that it’s summery stems in part from its shade, but more intriguingly from the myth that many years ago Western travellers in the tropics noticed that the natives wore clothes with red linings to protect their skin from the sun.

Solaro’s heat-repelling qualities are sadly mythical, but that ought not put off any man considering a summer suit made from the stuff. If it were ordered with little lining, and worn with linen shirts and brown slip-on shoes it would be comfortable on all but the very hottest days. One of the fabric’s qualities that make it appealing to the clothing connoisseur is that it suggests the wearer doesn’t feel bound by the opinions of the kind of lesser man who might consider Solaro eccentric – you either ‘get Solaro’, or you don’t. This has given the cloth a cult status among tailoring aficionados, who like the fact that it’s not entirely business-appropriate. Ordering bespoke suits that can’t easily be worn to the office is a powerful statement of intent, and perhaps the distinguishing characteristic of the modern dandy." - Mansel Fletcher for Savile Row's Chris Kerr Bespoke.

"Solaro is a good example of how the language of textiles absorbs meanings which go further than the aesthetic appearance. Despite its iridescent, shiny surface, which might seem to be an inclination towards flamboyance, its military origins and the standing of the men who wore it, have given solaro a reputation of composure." - the VBC glossary; a well-written resource for men's fabric descriptions.

As it turns out, we have a handful of friends in the business (whom we consider "menswear connoisseurs") who happen to have bespoke suits cut from the traditional Solaro fabric. So in the spirit of old-world elegance and even-older-world competition, feel free to use the comments section below to share your opinion on "who wore it best". 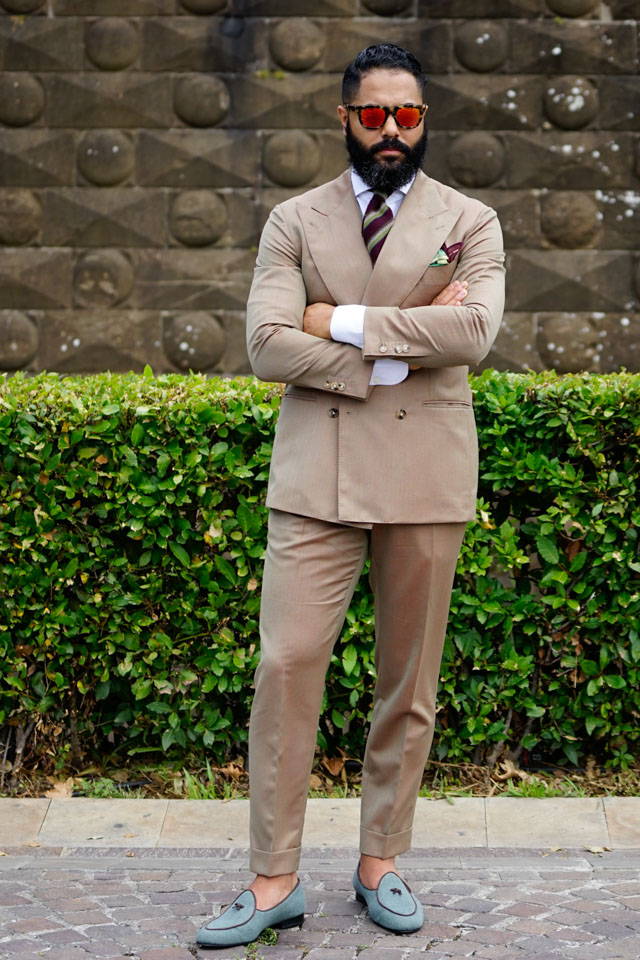 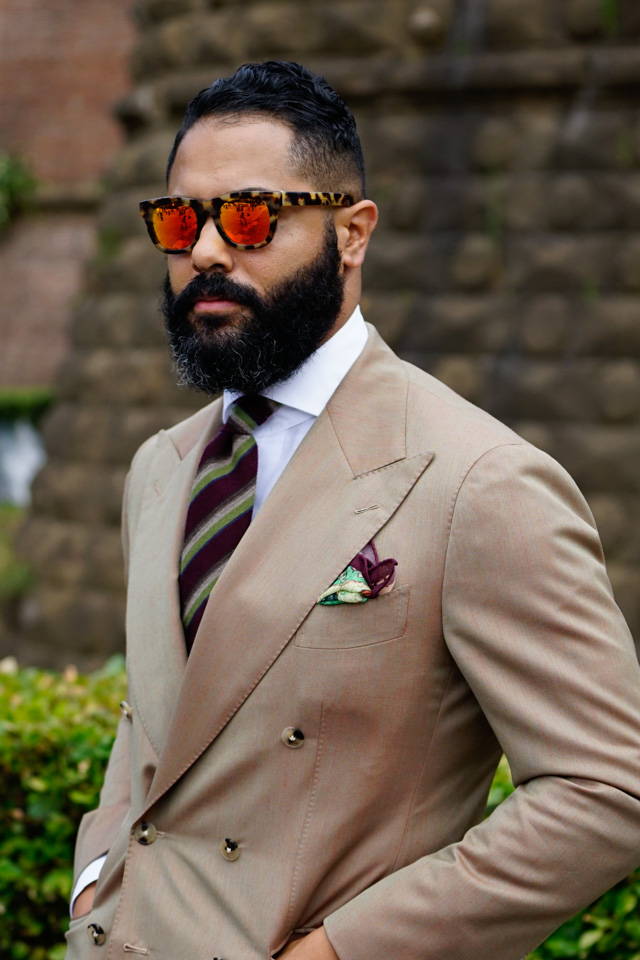 For the record, Angel also has a single-breasted Solaro suit, as we've featured before.

There's that Belgian loafer again, this time in a bluish-grey canvas with leather trim. 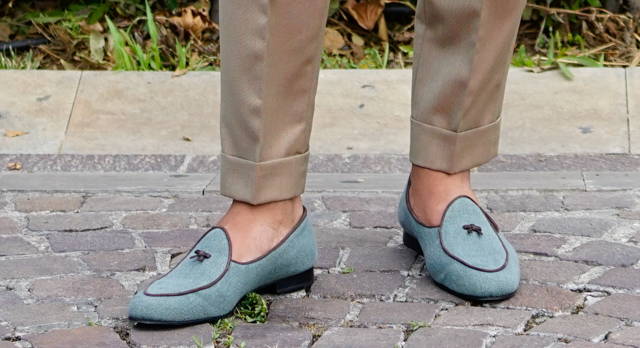 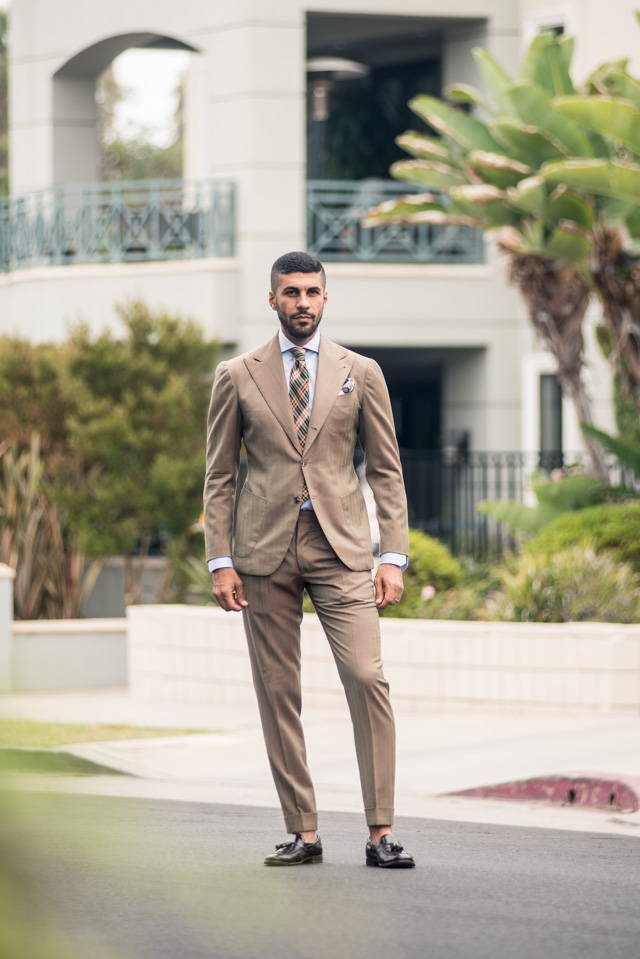 Khaled's solaro is cut the Neapolitan way; nipped at the waist and broad in the shoulders, with patch pockets, bold lapels, and generously roped sleeves. 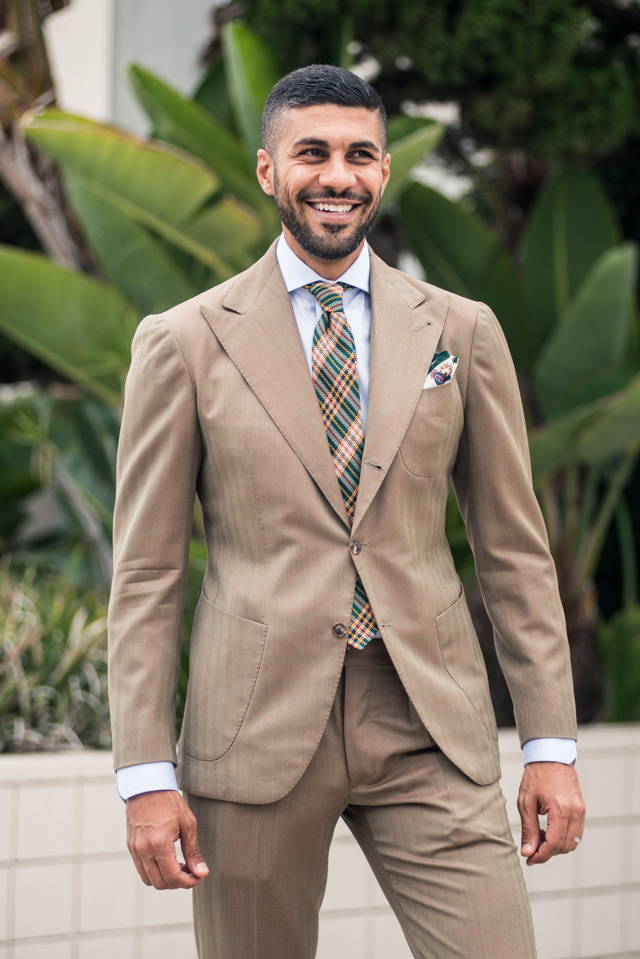 If you look closely you can see hints of red and green yarns, as well as the iridescence as the light hits the fabric from different angles. 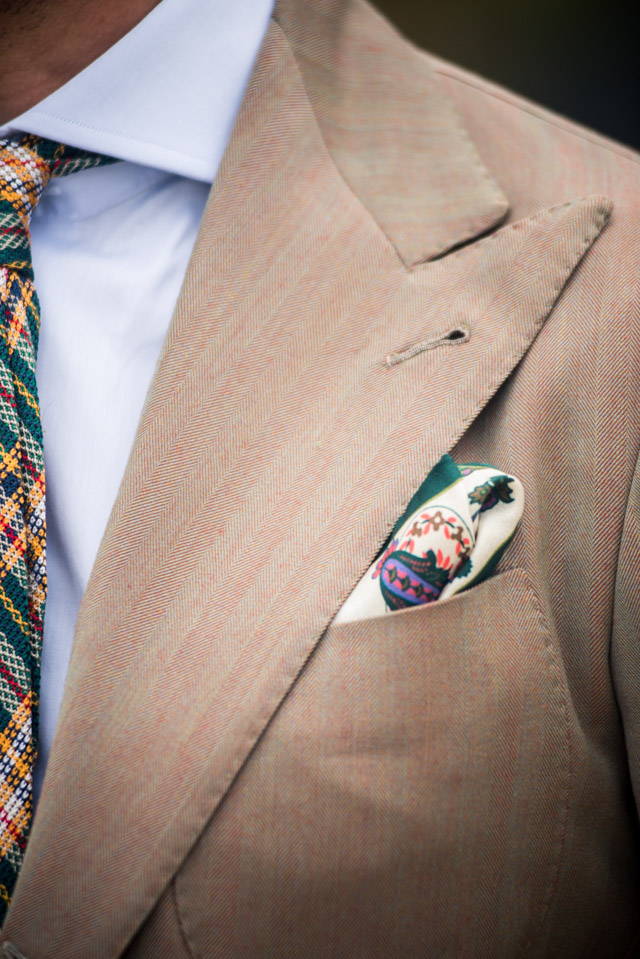 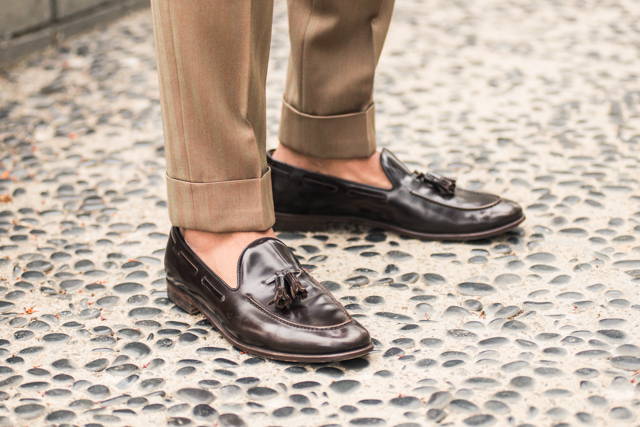 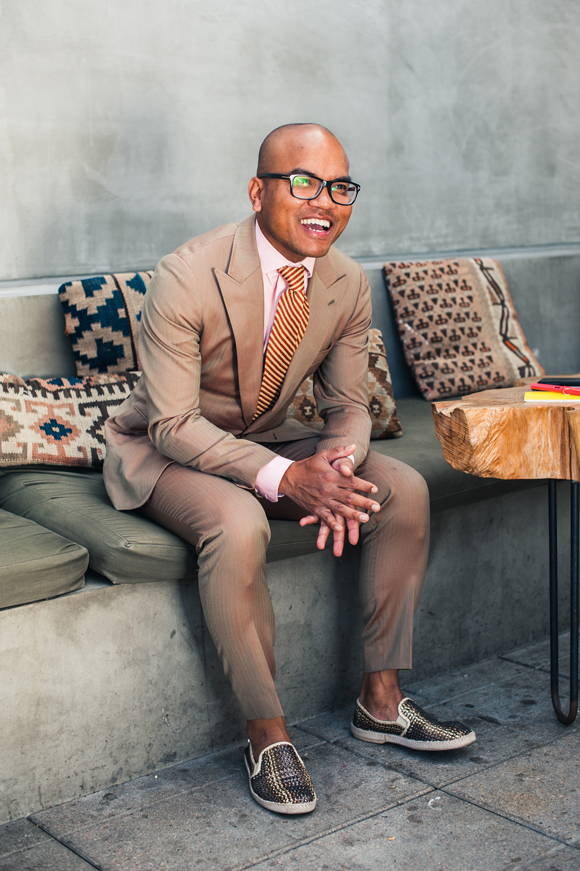 I'm very proud of my friend, fellow Canadian, JS Vann, aka "Sox", aka "Mr. Dirty Inc." Congrats on starting your own bespoke menswear shop in Toronto, and for doing it all with passion and honesty.

What I notice most about Sox's solaro is that it's cut perfectly for him. Unlike Angel and Khaled, JS is not 6 feet tall and model size. Sox is more like 5'8, on a good day. Roughly 170 lbs. By looking at him in his properly-cut suit, though, he looks tall and lean... Look closely at the image below. Notice how deep the button stance is (damn near his belly button), and how close together the two buttons are. This allows him to keep the jacket cropped (to lengthen the leg line) but creates the illusion that the jacket is longer. For shorter guys I like this better than a one-button jacket. 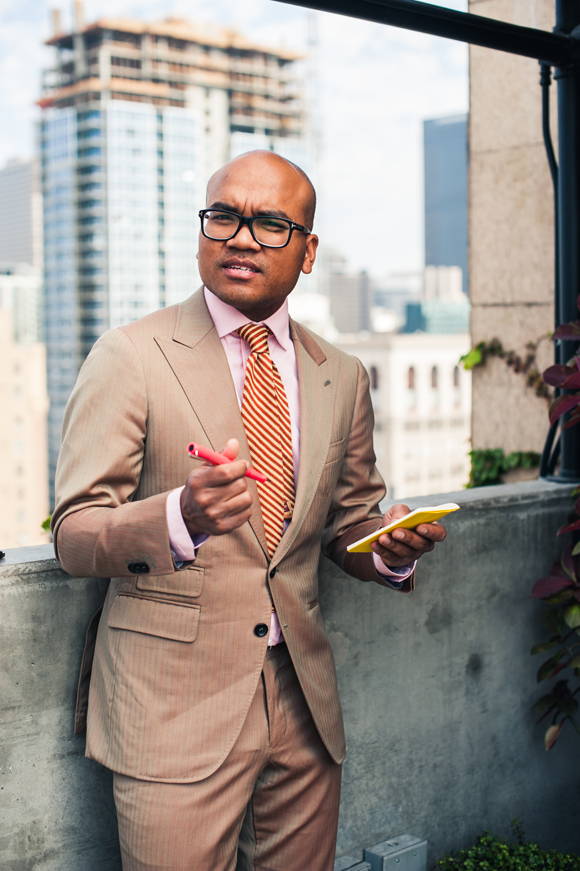 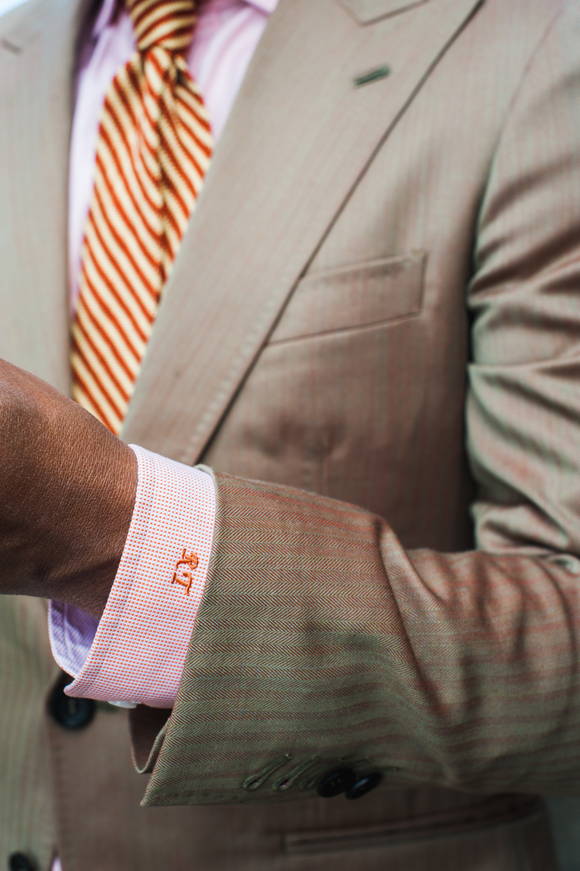 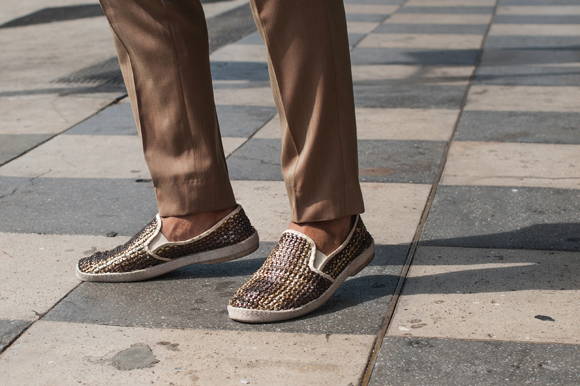 Thanks, as always, for reading and special thanks to each of these stylish gentlemen for participating.

Share
Read Previous Article What You Can Learn From: @Sartorial_en_Plus
Read Next Article Why I Love Menswear: Art, Science & Psychology