Bruce Boyer has seen a lot of men’s fashion come and go. That’s why he sticks to his classic American “Ivy Style”.

With more than 40 years of experience as a men’s fashion editor, writer, and historian, you can bet he has a lot to say about the ever-popular #menswear industry. Bruce was the men’s fashion editor at Town & Country magazine for 15 years as well as a contributing writer to several major publications including Esquire, Harper’s Bazaare and the New York Times. He’s also one of the most prolific American authors on men’s style and fashion. He’s written several books on the history and direction of menswear, including Elegance: A Guide to Quality in Menswear,  Eminently Suitable, Rebel Style: Cinematic Heroes of the Fifties, and Gary Cooper: Enduring Style. He’s even a contributor to the Encyclopedia of Clothing and Fashion.

We met with Bruce a few weeks ago in freezing cold NYC to learn more about his journey in the business and, naturally, get some of his uncensored thoughts on the current state of men’s fashion and style in America. 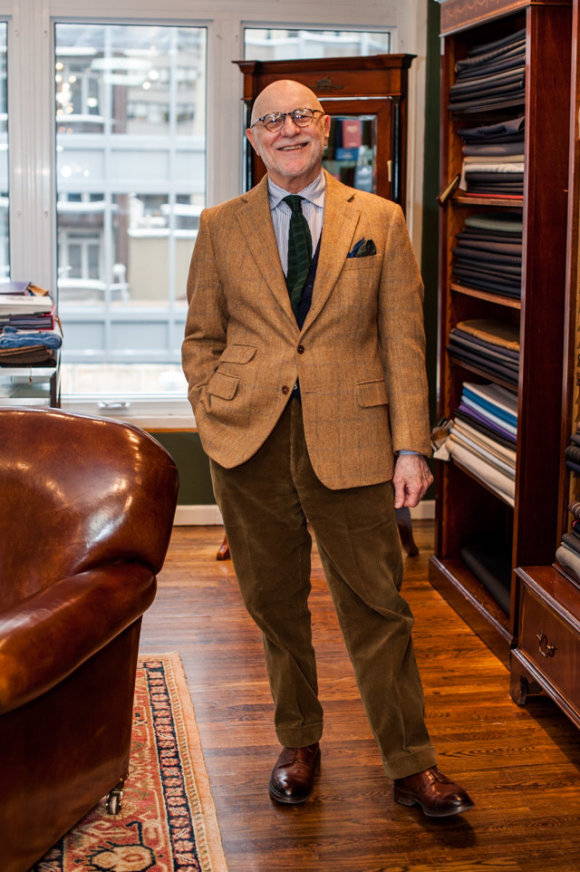 ON DEVELOPING A PERSONAL STYLE

“I think I developed an interest in clothing for two reasons. First I was slight as a child, a skinny little kid who had to find ways to protect himself in a tough neighborhood. So I hung around with the older guys, and quickly noticed their outward trappings: their clothes, their gestures and sense of humor, the way they walked, everything. The guys with the most style, the ones with an individual twist on things, got a lot of respect where I grew up.

Second, I was lucky to have had an incredibly tolerant mother, who allowed me to wear clothes of which she didn’t approve but tolerated. When I was a young man, a very young man (12 -16), I tried everything: zoot suits, rebel style , California casual, and everything else that was going on in the 50s. So I experimented a lot with “looks”. And that’s important: a young person should experiment, find out what works and what doesn’t. As you grow and discover who you are, you fine-tune your appearance to accommodate your personality and lifestyle.

As far as my outfit on this day, to my mind, it’s a country gentleman sort of look. Slightly rumpled, like me. The jacket is a 16-oz tan Scottish tweed with a faint blue overcheck. The trousers are a heavy, olive corduroy (flat front). The tie a green silk knit, horizontally self-striped from Italy. The sweater waistcoat is navy blue cashmere. The shoes are Scotch-grain derbies with rubber soles.” 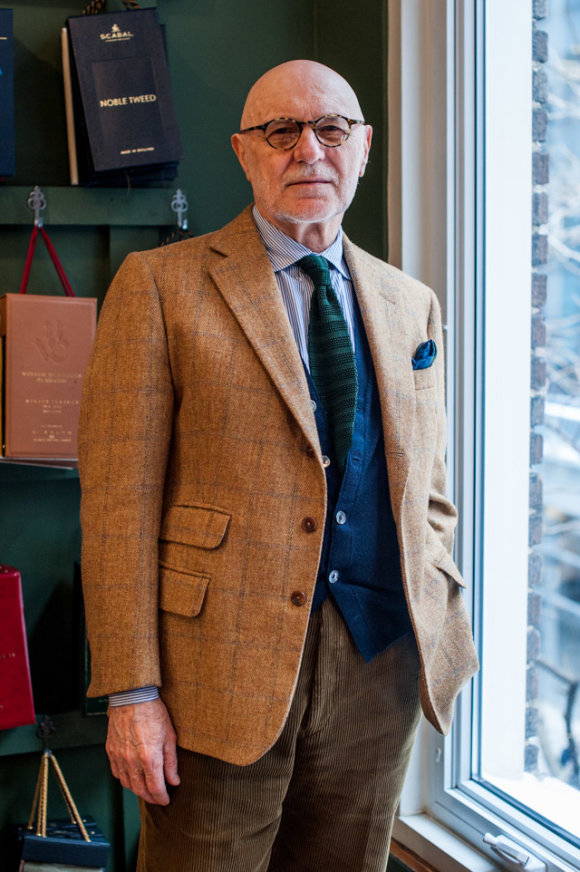 ON LIFE IN THE FAST LANE

“I cut my teeth at Town & Country, as their first adjunct men’s fashion editor for 15 years. I couldn’t have had a better education because the 70s and 80s were a golden time. The legendary Frank Zachary was editor-in-chief (I wrote a tribute to him for the magazine last year on his 100th birthday). He was a great editor. He gave a young writer his head and let him follow his own style rather making him conform to anything.

It was the last age when magazines were stocked with eccentrics and money. The junkets were fabulous: I flew off to The Hebrides, South of France, Stockholm, wherever I found a story, really. We traveled to Milan and London regularly. You got to meet a lot of very interesting people, but I was always drawn to the clothing craftsmen, the real tailors and shirtmakers and bootmakers. They were more interesting than many of the designers.

With that said, I think the most elegant man I’ve ever known was Bill Blass. He wore the most beautiful clothes — he had tailors all over the world — had naturally perfect manners, a generous spirit, wonderful sense of humor, and spoke like a Cole Porter song. In many ways he was the epitome of true American style for me.”

ON THE PERILS OF FASHION DEMOCRACY

“Beginning after World War II, the way fashion works changed radically. From the historic initiation of fashion to almost mid-20th century, fashion started at the top of the social scale and worked its way down to the bottom. But starting in 1950 or so, fashion began to be determined from the bottom up. Designers, particularly from the late 60s on, began to look to the street for inspiration. The great American icons of fashion for men — jeans, T-shirts, “active” footwear, barn jackets, and the rest — all come from the street, the playing field, the war zone, and prole gear, rather than from the wealthy, the aristocratic and royal. It’s largely a democratic movement, with help from technology and a relatively stable economy. A hand-tailored wardrobe is today an infinitesimally small cut of the fashion pie. Tailored clothing generally has become a choice rather than a necessity for many businessmen. The whole historical movement in clothing, from the 20th century until today, has been towards casualness and comfort.

I tend to look at these things dispassionately because my taste is somewhat imprisoned by the years of my youth. I really haven’t had any “fashion phases” since I was 20 or so. I’ve concentrated more on finding purveyors who could give me what I wanted… I feel perfectly comfortable (in fact more comfortable) in a tweed sports jacket, dress shirt, tie, flannel trousers, and good leather shoes.

Interestingly, the insanity of the moment is guys who wear their tailored clothes much too tight. All those constricting little shiny suits that the Italian fashion herd has been pushing. Most of these guys look like they were poured into their clothes and forgot to say when. They look uncomfortable and make those of us who have to look at them uncomfortable. I think tailored clothes should have good shape, but by comfortable. I would never sacrifice comfort for fashion. But that’s what fashion is, isn’t it? Something so ridiculous, it’s got to be changed every season.” 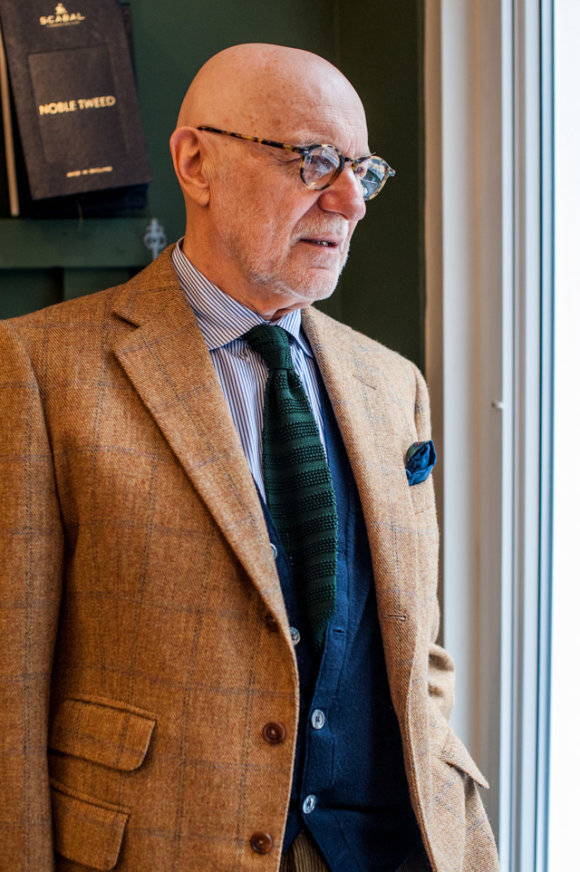 “Fashion is changing. I mean where it’s coming from is changing. Today the best men’s fashion magazines are the Japanese ones…The most interesting ideas are coming out of Hong Kong, Singapore, Tokyo. I think — and this is an attempt at a historical perspective — guys in that part of the world are taking ideas from the Americans, the Brits, the Italians , mixing it all up, and coming up with something unique…

I don’t really understand why we can’t produce a good men’s fashion magazine here in the USA, but at the moment we can’t… People used to get their fashion information and advice from magazines, but magazines have become lazy and safe and conservative. Editorial is too tied in with advertising – they’ve become too interested in promoting only the establishment money. Bloggers have gone around all that, they can promote what they want and do it faster. They give us all more choices, more perspective, more information. I think bloggers are responsible for men being more educated about their wardrobes today.

Of course there’s a lot of misinformation too, but there’s always been a lot of misinformation. An intelligent person will come to know which source to trust and which bloggers are just blowing smoke… I get most of my daily media information today from blog sites, rather than from magazines. There are at least a dozen site I visit religiously. I do think that anonymity isn’t helpful when it comes to people commenting on blog sites, though. There should be complete transparency and accountability in any sort of publishing.  That would help to get rid of much of the confusion.”

ON BUYING QUALITY & HAVING FAITH

“My grandfather, an ordinary blue collar working man, had one good readymade suit and one sports jacket, one good pair of shoes, perhaps four or five dress shirts and as many ties. Today it seems that many have steaming piles of cheap clothing, but no good clothes. Even many luxury brands are no longer concerned with quality.

I think the reason is that, in today’s world, we’ve lost both the sense of occasion and a sense of quality. I do find this a bit frightening because I think it may mean we no longer think about the future. Those who are concerned for the ecology have been saying this for years now, and I’m worried that it may be true. We’re living too much for today, “getting and spending” as the poet William Wordsworth put it. And on an even deeper level, it means we may have no sense of faith in ourselves anymore.

It does seem to me that men used to dress in order to look better. I am optimistic that this idea will return, if for no other reason that we’re living in a global economy, competition is fierce, and the weapons of dress and grooming and manners will once again come into play.” 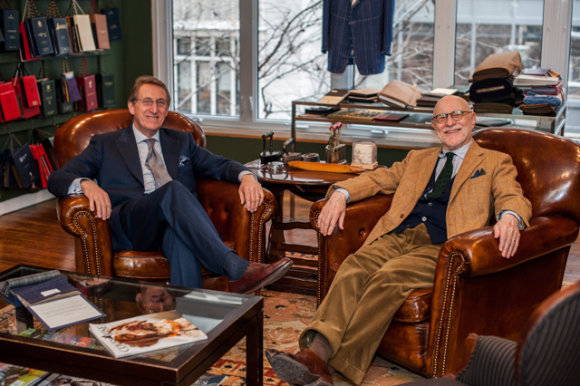 Bruce with one of his favorite tailors, Len Logsdail (whom he helped get his start in America).

Thanks, as always, for reading and special thanks to Bruce for sharing.