A Brief History of Men's Fashion

We’ve said it time and time again, menswear is ruled by history and tradition. Every person in menswear (designer, stylist, editor, etc) has taken inspiration from the past at one time or another. And no era has been overlooked.

Therefore, as we continue to explore the foundations of personal style, I thought we’d take a quick look back at the last hundred-or-so years in men’s fashion. Perhaps this will provide a little insight or context as to how menswear shifts, and more importantly, how we can make informed decisions when it comes to buying clothing and developing personal style.

LATE 1800S: LAST OF THE VICTORIANS

As the nineteenth century came to an end men were slowly shaking-off the Victorian influence which still had them wearing tophats, frock coats, and pocket watches while carrying walking sticks. This may seem like an elaborate and restrictive way to dress, but it was a big step in the right direction considering the Georgian period that proceeded it had men wearing feathers, panty hose, and high heels. And you thought you were a “dandy”. 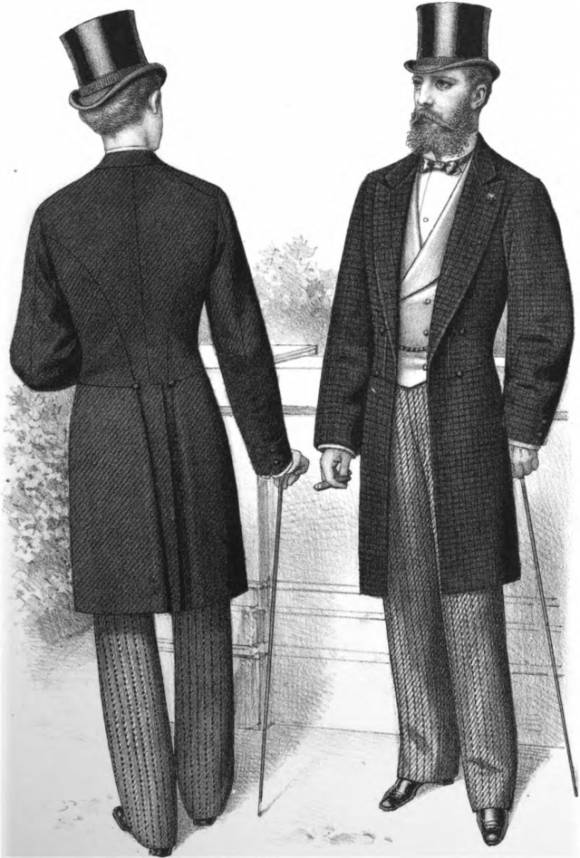 As we moved into the 1900s men’s clothing was predominantly utilitarian and rather unimaginative. The long, lean, and athletic silhouette of the late 1890s persisted, and tall, stiff collars characterize the period. Three-piece suits consisting of a sack coat with matching waistcoat and trousers were worn, as were matching coat and waistcoat with contrasting trousers, or matching coat and trousers with contrasting waistcoat. Sounds familiar, right? Trousers were shorter than before, often had “turn-ups” or “cuffs“, and were creased front and back using the newly-invented trouser press. 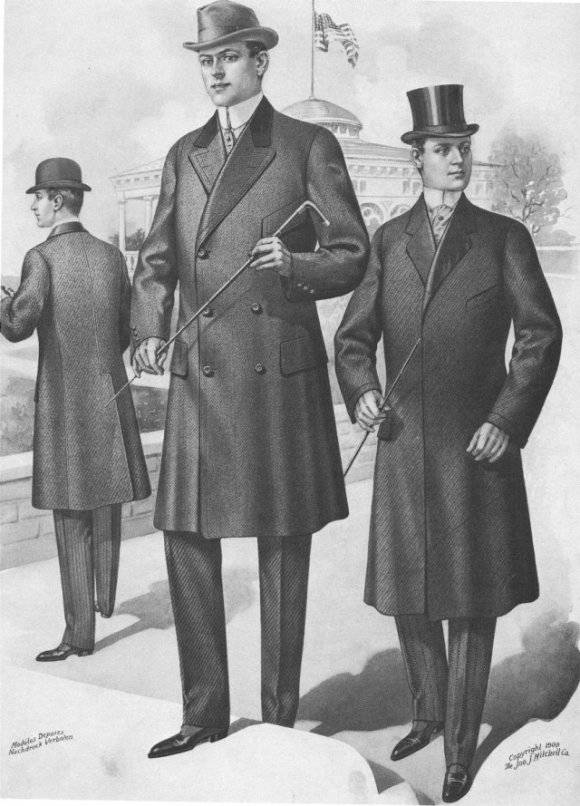 After the war (which introduced numerous classic menswear designs which are still used today, like trench coats and cargos), business started to pick-up and Americans had more money. More money allowed them to travel more and broaden their horizons culturally and aesthetically. Many crossed the Atlantic to England and France. Naturally they returned with suitcases full of the latest fashions being worn overseas.

Of all the countries, England had the most influence on American menswear. In the 1920s American college students began putting their own spin on pieces being worn at the legendary Oxford University, including button-down shirts, natural-shouldered jackets, regimental ties, and colorful argyle socks. Furthermore, the Prince of Wales, who later became the Duke of Windsor, was the world’s most important and influential menswear figure. Through newsreels, newspapers, and magazines the elegant Prince became the first international “style icon” and became widely known and renowned for his impeccable taste in clothing. He was a legitimate trendsetter for every day people and it was the first time in history that clothing advertisers would use a celebrity face to sell clothing, shamelessly plugging their items “as worn by the Prince”. 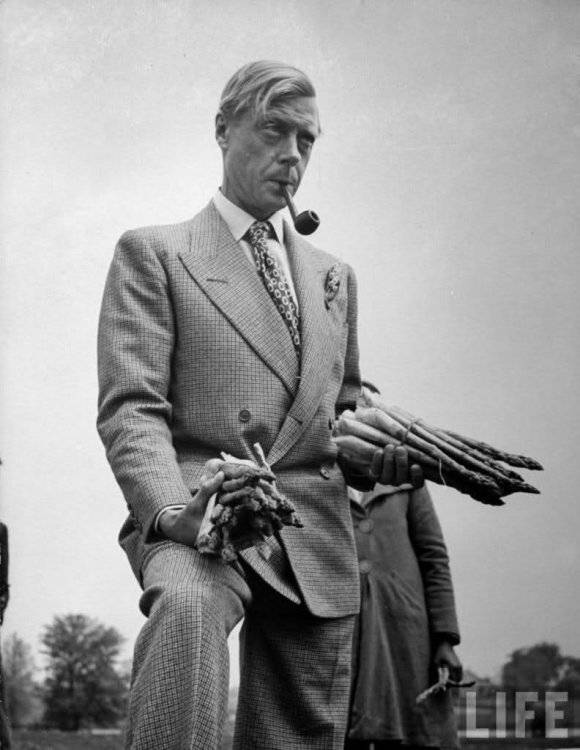 The begining of the 1930s saw the great depression. Although the average man couldn’t afford to partake in the world of fashion, many often enjoyed observing the style choices of those who could. Hollywood films on the Silver Screen became a beacon for hope for the working class man living in this era. Men and women alike looked with admiration and aspiration to elegantly dressed stars like Fred Astaire, Clark Gabel, Cary Grant, and Gary Cooper.

In the 1930s the American taste level was at its peak, rivaling that of any European country. It was a time when American men took pride in the clothing they wore and the image they projected. It was a time when men dressed by certain codes of conduct and etiquette. The “menswear rules”, which we often reference, were written in this period.

“For the first time American men realized that clothing should not be worn to hide the natural lines of the body, but, rather, to conform to them, thereby enhancing he male physique. At the same time, clothes should not be too obvious. Instead, they had to become part of the man who was wearing them. The idea of clothing was not to set the man apart (as had been the case for centuries, when kings and noblemen dressed primarily to accomplish just that) but to allow him to be an individual among individuals…. Americans had finally leanred that the goal of good clothing was to flatter rather than be conspicuous.” – Alan Flusser 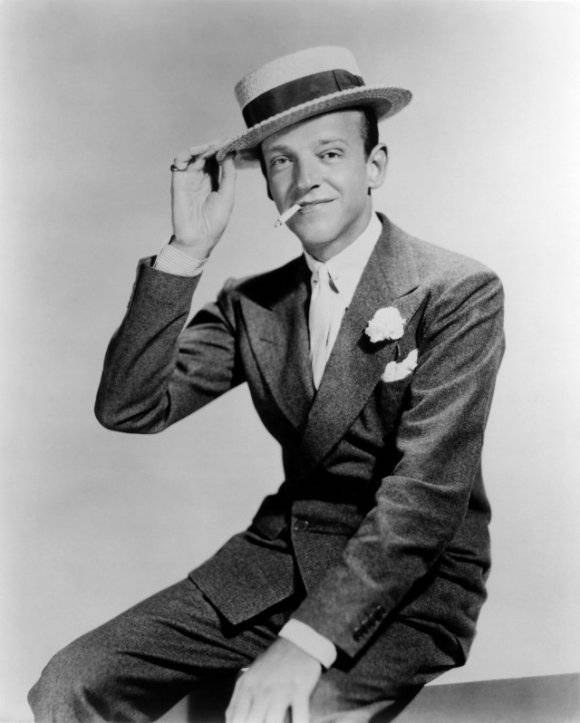 With the end of World War II, American men strayed from the high standards and basic principles of fine dress established in the thirties. Part of this was changes in the workforce and the loss of formality in everyday life. With lower demand, the price of custom tailoring rose, which allowed for the mass production of menswear to takeover as the everyday norm. This period saw the introduction of mass produced ready-to-wear clothing in America, by some brands that are still selling us clothing today.

There were positives and negatives to these new methods of mass production. On the one hand, basic clothing was cheaper and more accessible than ever. On the other hand, there was less variety in the styles being offered, and, much worse, these major clothing manufacturers realized (just like the automobile manufacturers) that they could stimulate sales by offering changes in styles every year, or even every season. This began the “trend cycle” in retail, which was created by clothing manufacturers to make more money and propagated by the magazine industry, also to make more money.

Ultimately this marketing strategy pushed the consumer further and further away from the “ideals of classical dress” established in the 1930s, which were all about choosing long-term pieces that best flatter the body. Instead the goal of clothiers became to confuse and pressure the consumer to continually “re-invent himself” by purchasing “new styles” that are “in fashion”. More sales, regardless of the longevity or aesthetic of the look. 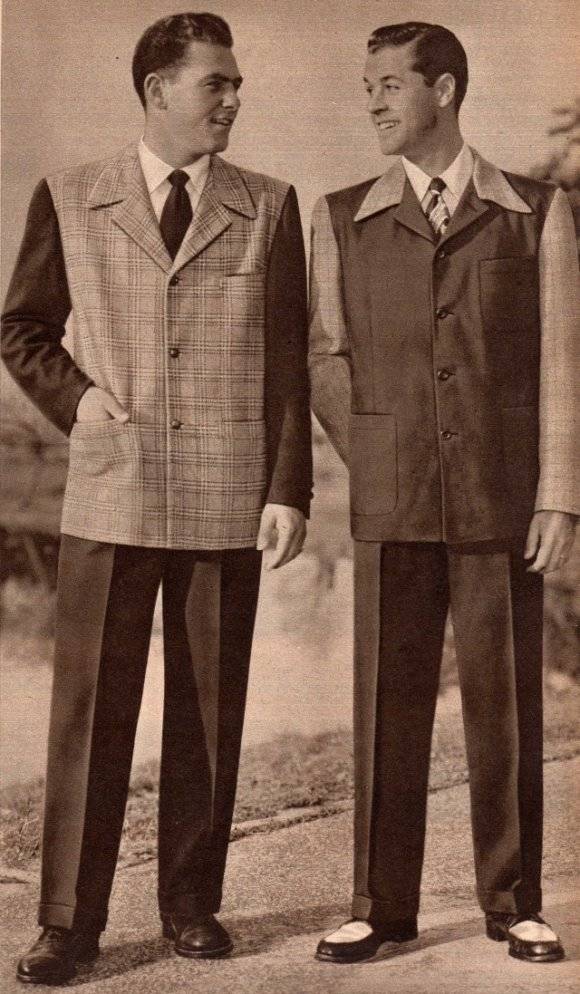 The 1950s was the Age of Conformity. Young men returning from the military were anxious to fit right in with the establishment. Fitting in and “looking the part” meant taking on the Ivy League look, which was dominating menswear. Individuality in style of clothing was an afterthought. The goal was to look “part of the club”, in a boxy sack suit, oxford shirt, rep tie, and loafers. This was another big boost for mass Ready-to-Wear manufacturers who gladly sold the same ill-fitting tweed jackets to any young man trying to look smart and employable.

Furthermore, the 1950s saw the introduction of man-made fabrics like rayon and nylon. This was another boost to the bottom line for the clothing manufacturers who could now save significantly on the cost of fabric, while producing a garment that was thought to be “more durable and easiest to wash”. As it turns out, synthetic cloth makes for terrible menswear garments, especially in suiting. Natural fibers are always better.

Aesthetically the period was dominated by conservative grey suits and minimalist accessories (hat, pocket square, cigarette, and martini) for just about everyone. 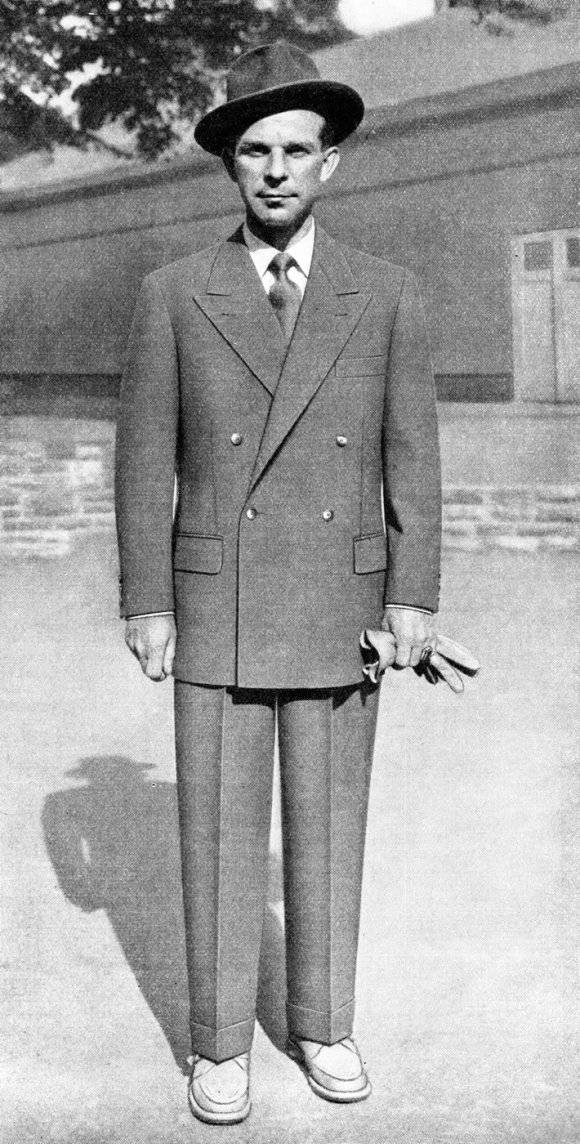 The 1960s were a decade of unrest and rebellion against the establishment and the conservatism that was celebrated in the 1950s. Clothing reflected this new attitude, especially with the youth who were more concerned with self-expression and individuality than classical dressing by the “rulebook”. The clothing industry caught on to this new wave with the youth, and offered a plethora of styles. Stores carried more variety than ever. It was approaching an “anything goes” period, where often the thing that mattered the most was not what you wore, but what you didn’t wear.

The was also the first time that fathers began looking to their sons for advice. The first time in history that grown men wanted to look young and care-free. This trend, of course, only took us further away from the rules of elegance that were established in the 1930s. 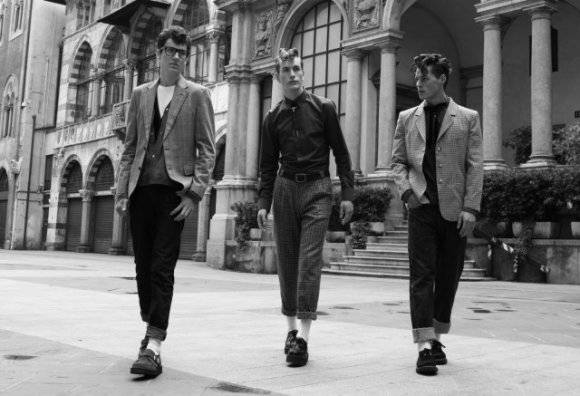 The early 1970s were a continuation of late 1960s hippie rebel fashion. For men this particularly meant bell bottom jeans, tie dye shirts, and military surplus clothing. The most popular accessories of the early 1970s for men were homemade, with necklaces, headbands, and bracelets being made from all-natural materials such as wood, hemp, and leather.

Men began to wear stylish three-piece suits (which became available in a bewildering variety of colors) which were characterized by wide lapels, wide legged or flared trousers, and high-rise waistcoats. Neckties became wider and bolder, and shirt collars became long and pointed as the “disco funk” was all the rage. 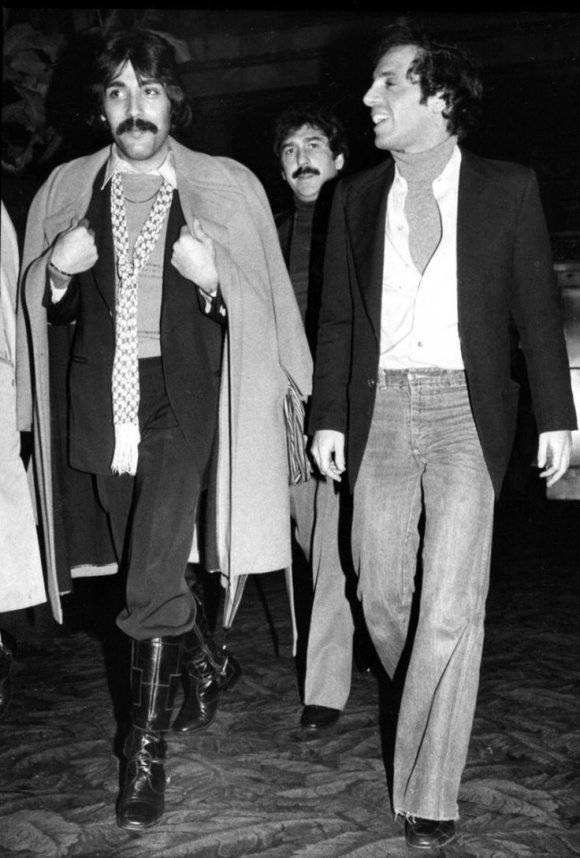 In the 1980s things got a little more serious, with broad shoulders framing power ties and suspenders. Bold colors and graphic patterns conveyed a new national confidence and businessmen took to power dressing with an emphasis on expensive clothing and gaudy accessories. 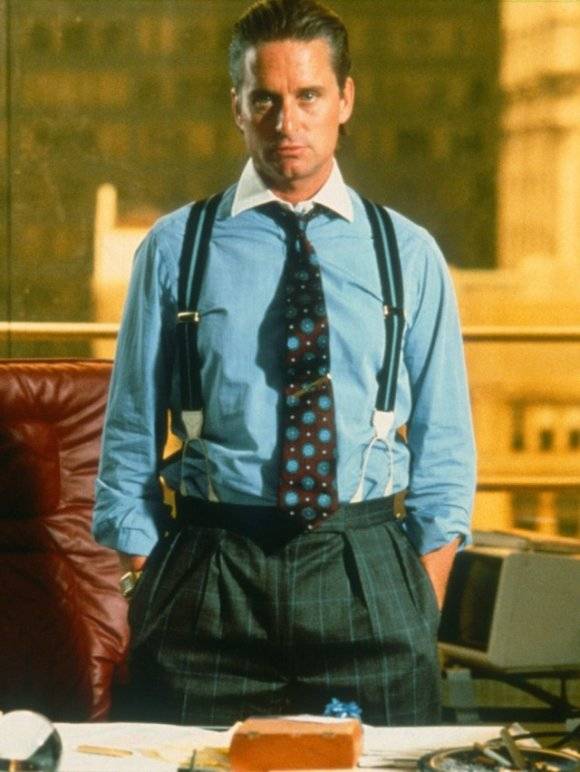 This may be perhaps the worst-dressed decade of them all. The fashion in the 1990s was the genesis of a sweeping shift in the western world: the beginning of the adoption of tattoos and body piercings. This brought back the indifferent, anti-conformist approach to fashion, leading to the popularization of the casual chic look; this included T-shirts, distressed jeans, oversized hoodies, and trainers. “Business Casual” also enters the lexicon as corporate offices generally become less formal, ultimately causing the suit to get bigger and uglier than ever. 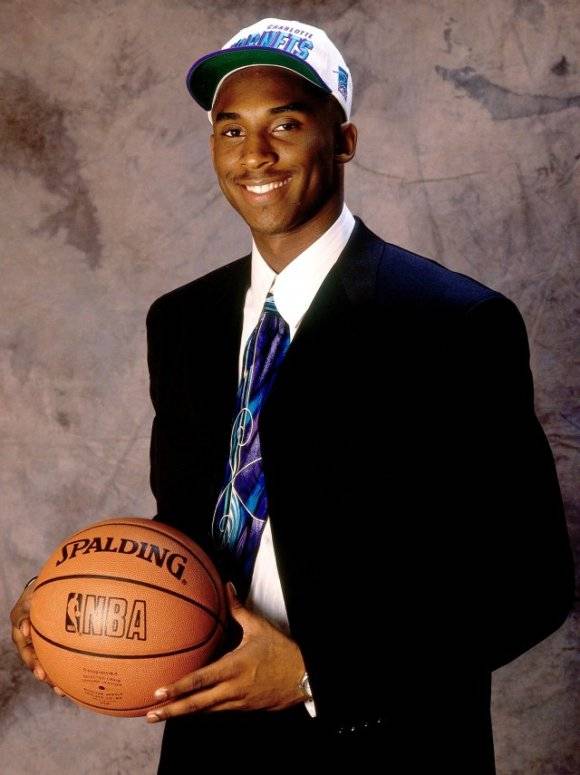 Menswear in the new millennium was influenced primarily by hip-hop culture for the youth, and European “slim fit” tailoring for the older gents. The suit finally started to slim down, as the “European cut” became highly sought after in America, to the point where eventually it became hard to find stores that didn’t carry “slim fit”. The internet also made it easier for men to learn about menswear and share their opinions with fellow style enthusiasts. We saw the birth of the first menswear blogs, with this one starting in 2009. 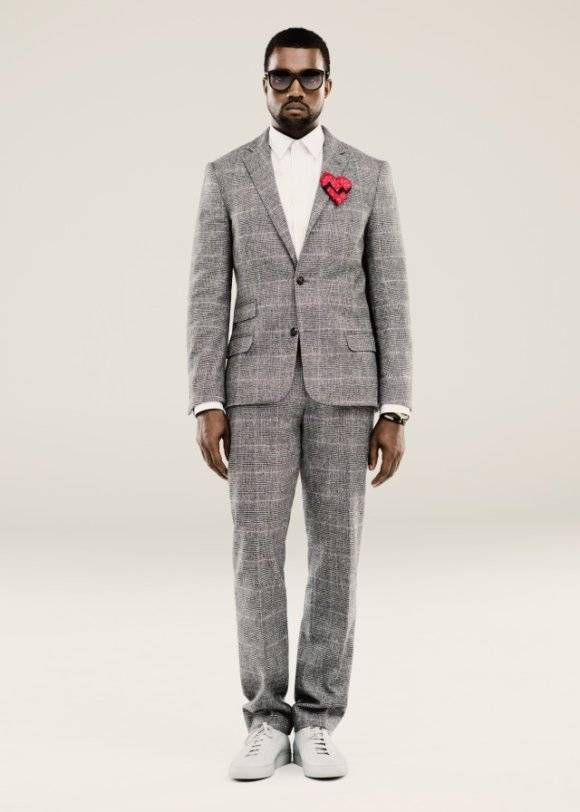 2010S: THE EVOLUTION OF STYLE ONLINE

The 2010s have brought us the evolution of the “fashion star”. Fashion bloggers have become mainstream. On the one hand, suddenly fashion is in the hands of the people, producing a larger variety of styles, reviews, and opinions than ever before. On the other hand, those being watched are naturally encouraged to try harder and harder to stand out from the crowd. “Peacocking” became a menswear term in the early part of the decade for “trying too hard”, although men have generally become more confortable with subtle, tasteful styling.

This period also marked the widespread acceptance of online shopping. Style enthusiasts from all over the world now have access to more brands than ever, from the convenience of their homes. The internet also allowed for more start-up brands than ever, marketed using social media and funded with online resources like kick-starter. In a way, we’re starting to see the re-surgence of the small brand, fueled by the power of the internet and the desire for consumers to have something limited and exclusive. The best part is, middle men are getting cut-out every day. Department stores, who’s business is marking-up goods that have already been marked-up by the wholesaler, are losing their stranglehold on the market as designers now have a scalable solution to sell their products directly to their consumers. 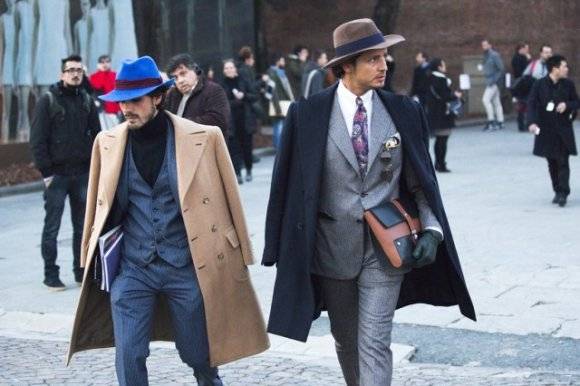 Ultimately my hope for the future of menswear is that we can get back to the ideals of classic dress established in the 1930s, and gradually add personal influences from there. Its starts with understanding that there is one style that is best suited for each of us…our bodies, our lifestyles, our personalities, etc. Sure there is plenty of variation within that one style, but it shouldn’t require purchasing a new wardrobe every season, but rather adding well-made items to a lifetime collection of beautiful pieces that properly present, and represent, the wearer. At Articles of Style we preach quality over quantity and making thoughtful purchases to build a properly curated wardrobe that will last the test of time.